A Conversation with Gigi Sohn, Distinguished Fellow at the Georgetown Law Institute for Technology Law & Policy and a Benton Senior Fellow & Public Advocate 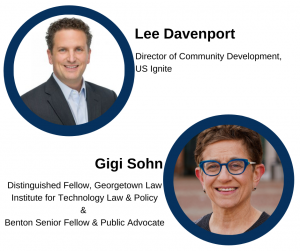 We invited Gigi Sohn, Distinguished Fellow at the Georgetown Law Institute for Technology Law & Policy and a Benton Senior Fellow & Public Advocate, to brief leaders of US Ignite Communities on the Infrastructure Bill. Sohn provided an overview of the “Bipartisan Infrastructure Framework Bill”, also known as BIF, and outlined key federal funding insights for smart communities and cities.

Below are excerpts from the conversation between Lee Davenport, US Ignite Director of Community Development and Gigi Sohn.

Lee Davenport: Welcome Gigi! Can you start with telling us what the Infrastructure Bill holds, and what communities should know?

Gigi Sohn: The Bipartisan Infrastructure Framework Bill, or BIF, presents enormous funding opportunities for communities. The bill may pass at the end of September, so the good news is that a lot of federal money will be flowing!

The largest component of BIF is the Broadband Equity Access and Deployment Program, which sets up $42.45 billion for grants for broadband deployment. The National Telecommunications Information Administration (NTIA) would administer this program. Unserved areas, defined as areas that have 80% or more households lacking 25 megabits per second (Mbps) download and 3Mbps upload speeds would be prioritized. Once states address unserved areas, they can address underserved areas, defined as having 80% or more of the area lacking 100 Mbps download and 20 Mbps upload speeds.

Another important element is that the bill prioritizes future-proof networks that can easily scale up to meet evolving connectivity needs and support broadband deployment. This is essentially a way of saying “fiber” without actually saying fiber.

"Money will be available for just about anything a state needs - mapping, audits, economic studies..." Gigi Sohn, Distinguished Fellow at the Georgetown Law Institute for Technology Law & Policy and a Benton Senior Fellow & Public Advocate

Lee Davenport: So, if the bill is expected to be passed soon, how soon can communities apply for the NTIA grants?

Gigi Sohn: Well, NTIA has six months from the enactment of the bill to set guidelines for the grant program. Money will be available for just about anything a state needs – mapping, audits, economic studies etc. There are no deadlines by when the NTIA must give out the grants.

Second, all grants will require matching funds, which can come from the state or other philanthropic entity, or wherever.

Lee Davenport: What are some of the other critical parts of the bill?

Gigi Sohn: Yes, there are more! BIF also includes the Digital Equity Act, which offers $2.75 billion dollars to fund digital inclusion projects at the state and local levels. NTIA would also administer this pot of money through two grant programs – one for states to develop their own Digital Equity Plans and another for competitive grants for digital inclusion organizations, governments, non-government organizations, or other entities.

You may also find value in knowing that BIF renames the Emergency Broadband Benefit (EBB) the “Affordable Connectivity Program” (ACP) and puts $14.2 billion toward the monthly broadband subsidy for low-income folks, those who have just lost a job and the families of Pell Grant recipients. The ACP lowers the subsidy to $30 from the previous $50 and also prohibits Internet Service Providers (ISPs) from engaging in practices like upselling consumers or running credit checks.

Lee Davenport: This all sounds promising, but are there any potential issues resulting from the Infrastructure Bill?

Gigi Sohn: I think the biggest fear is that it is such a huge infusion of money that states will be eager to spend it quickly, but not necessarily wisely. This is why I am so focused on getting technical assistance to the states. NTIA will probably also have several staffers per state and territory to help them figure out the best technology solutions for their needs and provide ethical oversight.

Lee Davenport: As we prepare for what we’ve been calling the “tsunami of funds,” any final thoughts on how to get ready for it?

Gigi Sohn: For those that have state officials that are working on this, the best way to get ready is to get to them right away, and engage other communities in your state. Banding together and sharing information, will help you arrive at a concerted plan that can be taken to state officials.

Don’t wait. This bill is going to pass! So, I would say start planning now with your state officials and colleagues from other communities.