How does the testing tool work? Speed Up America uses open source software and the M-Lab test platform to collect Internet speed data and create a dynamic map of broadband access. Users can compare their speeds to service levels in other regions, and industry and government groups can pinpoint where further network investment is needed. Currently the tool provides comparative data on Internet speeds in Oregon. Data will be added from the state of Washington next, with other states soon to follow. 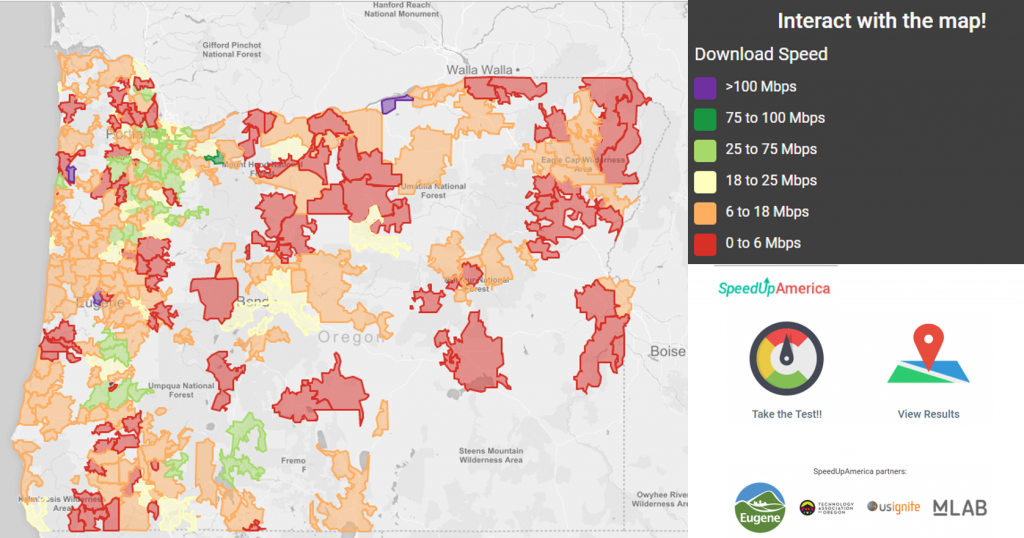 Speed Up America is one of many complimentary Internet speed mapping initiatives currently underway, but it’s also one of the most ambitious. It aims to build on work already done by Speed Up Louisville and Speed Up San Jose, and extend transparent broadband mapping across the country.

It also comes at a time when congressional leaders are wrestling with how to improve broadband measurement at a federal level. Senate leaders recently introduced a bill called the Broadband Data Improvement Act that calls for broadband providers to report Internet availability at a more granular level than previously required using GIS shapefiles. There is general consensus that current broadband maps are insufficient, and that improving digital equity – particularly in rural America – means first gaining a better understanding of where service is lacking.

Here’s what US Ignite Director of Technology Scott Turnbull had to say about Speed Up America in today’s launch press release:

“We’re proud to support Lane County and the City of Eugene as part of our Smart Gigabit Communities program in their efforts to map broadband access and provide transparent and accurate data on network speeds. Communities have proven over and over again how broadband boosts economic growth and improves quality of life. However, without accurate maps, we can’t identify where speeds are lacking and where we could be making a difference for communities seeking to attract new businesses, support citizen services, and enable advanced applications like telehealth and remote education.”