Project OVERCOME brings Olympic inspiration to Oregon and the World

This is a guest post by Matt Sayre, Managing Director of Onward Eugene, a non-profit based in Oregon that received Project OVERCOME funding to deploy novel broadband technology to underserved communities.

As the excitement of the Tokyo Olympics spreads across the globe, fans in the rural community of Blue River, Oregon will be cheering a little more loudly than you might expect.

In June, Blue River hosted the McKenzie International event, a track meet for athletes competing to qualify for the Tokyo Olympics. Participants included Australia’s Charlie Hunter and Jessica Hull, and Germany’s Amos Bartlesmeyer. They inspired audiences throughout the competition and provided a much needed moment of hope in a place that has seen more than its fair share of challenges. 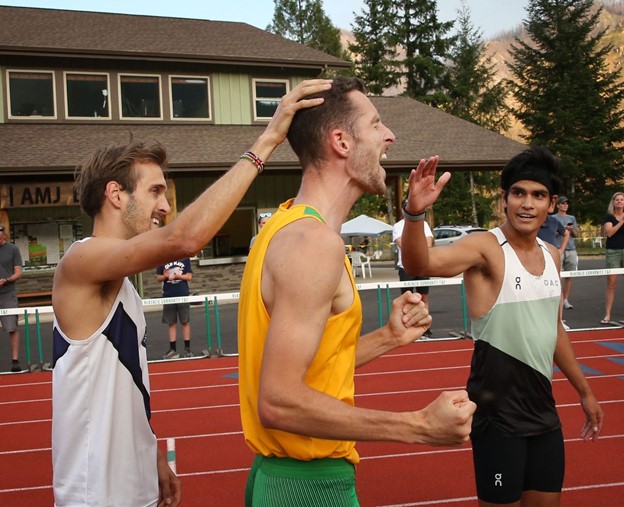 Athlete Charlie wins the 800m at the McKenzie International, making him the second-fastest Australian of all time and qualifying for the Tokyo Olympics. Photo credit Chris Pietsch of the Register Guard.

Last year the Holiday Farm Fire burned more than 270 square miles in the region, including more than 400 homes. The fire devastated the Blue River community and destroyed all of the area’s communications infrastructure. In March 2021, non-profit Onward Eugene, the McKenzie School District, and Elevate Technology partnered on a Project OVERCOME grant proposal with the goal of building internet resilience from the ashes of the fire. The proposal was successful, and funds from the grant awarded by US Ignite and the National Science Foundation are now being used to rebuild the area’s Internet infrastructure.

Based on the lessons learned from last year’s disaster, the team from the Blue River community is erecting a new steel communications tower to establish a resilient and permanent microwave wireless internet backhaul into the McKenzie valley. This solution will be solar powered and will be much less vulnerable to fire. The communications tower will also serve as a jumping-off point for new Internet services being deployed to the area. As part of Project OVERCOME, a Citizens Broadband Radio Service (CBRS) will power special WiFi “hot spots”, which will be given to students and families who are returning to the area to rebuild.

In a parallel effort, the Portland Track organization was exploring developing a benefit event for/in the fire-affected community. To do that successfully, event organizers knew they would need high speed Internet connectivity – in a place where it hadn’t existed before. With the announcement of Project OVERCOME, live streaming the event became a possibility.

“When the wildfires hit, the track in Blue River was an emergency refuge for those escaping the flames and we immediately looked for ways to help the community through our sport,” said Michael Bergmann, President of Portland Track and Founder of IncubatorU.

To enable the livestream pay-per-view of the event, Project OVERCOME partners utilized CBRS to bring Internet connectivity to McKenzie Track for the very first time.

We’re thankful to be in a position where we could stream the McKenzie International event and highlight the resilience of the Blue River community. Live streaming has not been possible at this rural venue before, with Project OVERCOME we are delivering world-class internet access to the region and truly building it back better. Geoff Turner, CEO of Elevate Technology Group and Project OVERCOME partner

Hundreds of track fans came out in person and tuned in online to cheer on the international field of world-class athletes. The athletes, many of whom were also University of Oregon Ducks, did not accept any prize money, maximizing the positive financial impact to the community. Locals said it was the largest event ever held at McKenzie Track.

I’m a sports reporter for a day!! Kind of… I’m covering the McKenzie International with @ChrisPietsch and how it’s significance after the fire. Proceeds from this event are going to the Community Rebuilding Fund. Live stream/info here:https://t.co/AZh8s6yt0a pic.twitter.com/Ho69tfiU6K

Track fans from around the world tuned in and paid $5.99 to access the race from the comfort of their living room. More than $3,000 in net proceeds were donated to the McKenzie Track and the Oregon Community Foundation – Community Rebuilding Fund.

The event also illuminated a path to rebuilding and economic recovery for Blue River. Building on the success of the McKenzie International, additional event organizers have already reached out to project OVERCOME partners about digitally enabling new events in the area. Events bring tourism and that translates to enhanced economic vitality.

It is these positive events that are going to put a smile on people’s faces, so people can say they can live here again. McKenzie is going to come back stronger than ever Cliff Richardson, community member and Holiday Farm Fire evacuee

Be sure to sign up for our newsletter for more case studies featuring best practices and lessons learned from our partner communities.