What happens when you bring new data to bear on a civic problem like reducing the number of critical restaurant health violations in a city? In Chicago, the answer is a new process that helps identify these violations eight days faster than the previous average. 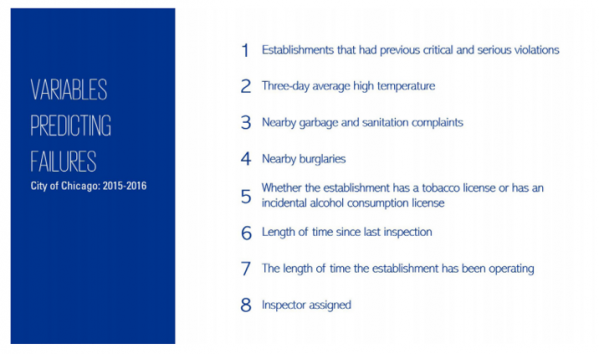 In our latest US Ignite Forum playbook published this week, we gathered insights from communities that are successfully applying new data to common local problems. The stories and strategies come from the Smart City Big Data, Part 2 workshop we hosted this past June, and, compared to a similar event in 2018, we found that this year’s workshop not only produced a much wider range of data use cases, but also more project deployment results.

In particular, the story of Chicago’s use of predictive analytics in the restaurant inspection process stood out. We learned that for the city’s 15,000 or so restaurants a few years ago, there were only 32 food inspectors in charge of monitoring restaurant food safety. The city examined how new data could make those inspectors more effective and defined eight common variables contributing to inspection failure. (See above) Working with a group of volunteer data scientists from Allstate, the Chicago IT team developed and deployed a new algorithm to help predict which restaurants were most likely to fail, and therefore which sites should be prioritized for inspection.

As detailed by former Chief Data Officer Tom Schenk (Twitter: @tomschenkjr), when Chicago tested its new restaurant inspection model, the data-driven approach led to early identification of 69% of critical violations versus only 55% discovered in the same time period otherwise. Put another way, the results represent a speed improvement of eight days across a 60-day period for finding serious food safety threats in Chicago restaurants.

Importantly, the data story doesn’t end there. Chicago has open sourced the project code for its restaurant inspection tool, making it available to other communities. And the same approach could also be applied to other city inspection processes including those associated with fire, building, and elevator safety.

Want to learn more? Check out our latest playbook online. All of our playbooks are freely available, and the US Ignite Forum library is growing.