Imagine a community where first responders become empowered by augmented reality (AR) and Internet-of-Things (IoT) technologies. A scene where public safety personnel arrives with the detailed preparations needed to tackle floods, wildfires, active shooters, and mass transit accidents. Where the general public’s safety is improved and property protected due to innovative uses of data, IoT devices, and AR.

In a step toward making this vision a reality, the National Institute of Standards and Technology’s (NIST’s) Public Safety Communications Research Division hosted a $1.1 million prize competition titled “The CHARIoT Challenge.” As a supporting partner, US Ignite helped NIST design and execute the dual-track competition for contestants sharing in the belief that AR and IoT can improve public safety operations. The IoT Data for Emergency Scenarios that demonstrates situational awareness information that would be provided to a first responder or an incident commander during a mission-critical event can be found at NIST’s publicly accessible Github repository here.

The two challenge tracks were:

Developers who participated in this track leveraged AR technology to convey information to first responders while minimizing the risk of information overload and maximizing situational awareness.

Despite COVID 19’s impact and related delays, the CHARIoT Challenge galvanized a group of top-tier AR and IoT technologists. The $1.1 million was split between winners across four competition phases. This pay-for-performance model incentivized participants toward an improved end product. The IoT track offered up to $212,000 in prizes, and the AR track offered up to $888,000. Below is a list of the winners!

The challenge proved successful in bringing together the data science community and developers to propel the use of AR in public safety. To review its outcomes, check out the report on the CHARIoT Challenge. It includes additional information on the design and execution of the challenge and lessons learned and a closer look at the winning teams. 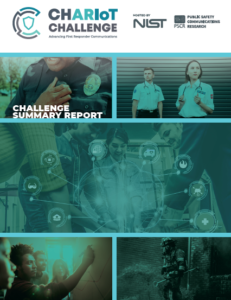 To learn about other US Ignite Challenges and Competitions click here. If you have any questions please send them to [email protected].