State regulations and regulatory mandates out of the FCC now govern how local governments can – and can’t – collaborate with wireless carriers on small cell deployments that are critical to the buildout of new 5G networks. Many cities aren’t thrilled with the legal constraints, but they’re nonetheless finding ways to move forward productively.

In particular, three cities recently discussed their 5G readiness strategies and milestones at a US Ignite panel session on Building Network Infrastructure for the 5G Future. The session took place at our annual Application Summit in Denver earlier this month, and if there was one recurring theme from the debate, it was that negotiations don’t end just because cities are now required to approve most small cell permits within a set period of time and for a set leasing fee. On the contrary, there is still much for cites and carriers to discuss. 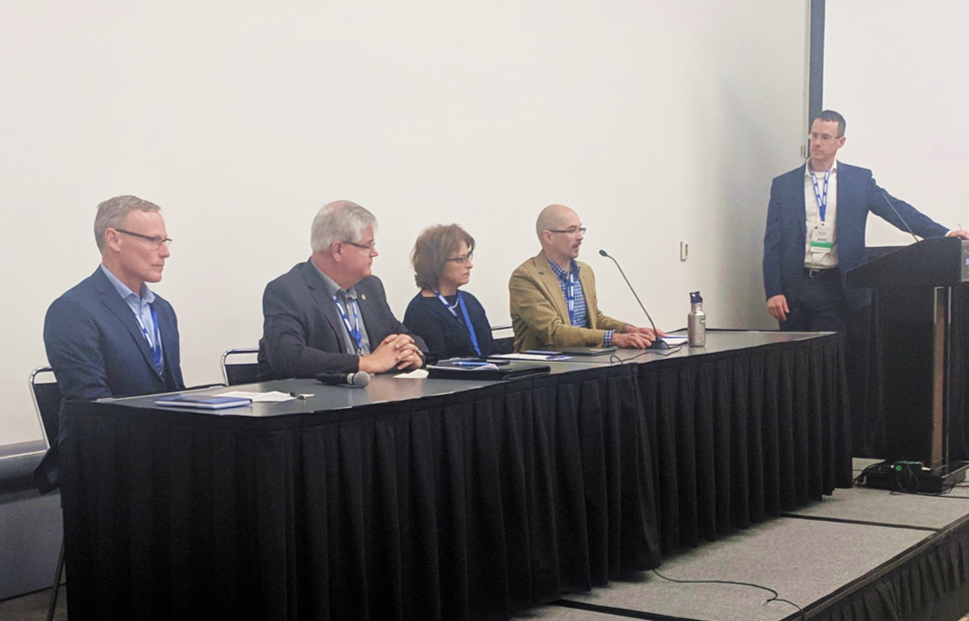 Two major issues cities have to consider include the fact that wireless technology continues to evolve, and that the deployment of new 5G infrastructure may cause some disruption in communities. Rondella Hawkins, Telecommunications & Regulatory Affairs Officer for Austin, Texas says that these are challenges her city is actively partnering with carriers to address. Austin can’t negotiate agreements any longer on permit timelines and fees, but local leaders can and do meet with carriers on a weekly basis to discuss how to make deployment processes as smooth as possible for the wireless companies and residents alike.

The city has perfected many of its processes since Texas passed state legislation on small cell agreements back in 2017 – so much so that Hawkins says, ”We’ve come up with a manual.” It’s a guidebook on everything involved in getting a small cell deployed.

Meanwhile in Chapel Hill, North Carolina, Executive Director for Technology Scott Clark has also been disappointed by statewide small cell legislation, but his team has come up with some creative solutions to ease the municipal financial burden of extending 5G access across the community.

Specifically, while Chapel Hill can’t set its own fees for wireless carriers to deploy small cells in the public right of way, it can negotiate with wireless companies for financial support around maintaining the backhaul networks in the right of way that feed those small cells. This helps reduce costs for the city as it seeks to ensure equitable access for citizens to high-speed broadband services.

There are signs that some partnerships between cities and carriers are decreasing friction in the small cell deployment process. San Jose, which signed landmark agreements with three major network companies in 2018 for bulk small cell permitting has an online GIS reservation system and has dramatically sped up permit approvals in the past year. Broadband Manager J. Josh Guevara says the city delivered 90 permits for one of its carrier partners in just three months last fall, and the process has gotten even faster since.

The big concern for all local governments is that even as they make it easier for companies to deploy new wireless equipment in profitable areas of town, there’s still no guarantee that everyone in the community will get the benefits of carriers’ advanced 5G networks. A representative from the city of Lafayette, Louisiana raised that very issue in a question-and-answer session after the 5G panel, suggesting that wireless companies won’t invest in rural and low-income regions.

Tim Johnson, Vice President of IoT Business Development for Sprint, the one carrier representative on the panel, took some time to think through his answer. Ultimately he pointed out that there are use cases for 5G that support different economic models from broadband networks in the past. With the Internet of Things, it’s not the volume of people that have to be connected that determines the rate of financial return, but the total number of everything that has to be connected that will control a network provider’s ROI.

Citing agriculture applications for 5G, Johnson says, “Things are changing. From the core traditional model of show me how many subscribers there are, [operators are moving to] show me how many cows there are… and how many everything else there are.”