The Fort Carson Smart Transportation Testbed is a $4 million program designed to test the viability of autonomous vehicles and sensor-based technologies to:

The program is a joint effort of US Ignite, Fort Carson, the city of Colorado Springs, and the University of Colorado’s Research and Engineering Center for Unmanned Vehicles (RECUV). It is funded and managed by the U.S. Army Engineer Research and Development Center (ERDC).

The Mountain Express automated shuttle was launched at Fort Carson in September of 2020 to provide passenger service to four key facilities in the post’s central cantonment area. The shuttle operated in the evening hours each weekday along a fixed 3.1 mile route. 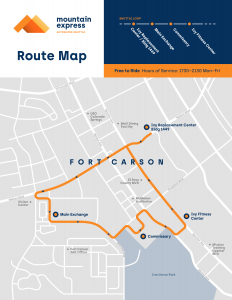 In addition to providing a valuable service to the staff and soldiers of Fort Carson the primary objective of the project was to develop experience operating an automated vehicle on the mixed traffic roads of a military facility.

To accomplish this, the program released an RFP and awarded First Transit a contract to operate the Mountain Express shuttle on the Installation. The shuttles used on the project were Polaris GEM e6 low speed vehicles outfitted with Perrone Robotics TONY autonomous systems kit.

The new network at Fort Carson will initially support the upload of vehicle data from the Army installation’s Mountain Express Automated Shuttle, as well as video traffic from route-monitoring cameras. Longer term, the network is designed for broader IoT research – including environmental analysis with air quality and weather sensors – that is planned as part of a collaborative initiative among Fort Carson, the city of Colorado Springs, and the University of Colorado Boulder.

Read more from US Ignite on Building the Military Base of the Future.