Believe + Achieve = Cleveland. Historically defined by manufacturing and affected by recent economic downturns, Cleveland is now in the midst of an inspiring renaissance. 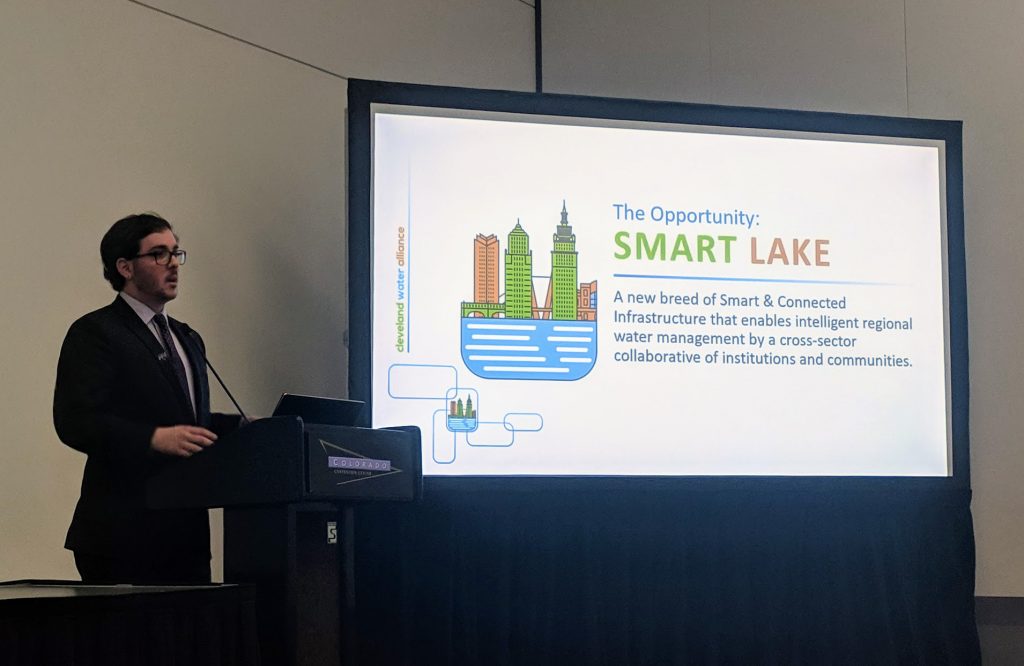 Lake Erie is an essential asset to the communities and industries that populate its shores. Unfortunately, its ecosystem is threatened by harmful algal blooms that can cause major ecological and economic damage. To combat this issue, Cleveland Water Alliance, DigitalC, and US Ignite launched Internet of H2O: a targeted challenge activating a handful of innovative entrepreneurs and researchers to pilot next-generation networking, detection, and analytics solutions for nutrient monitoring. The challenge was a great success, and now the Smart Lake Coalition is acquiring the capital resources necessary to create a scaled Smart Lake pilot, an infrastructure asset that will bring great benefit to Lake Erie and the region as a whole.

The people of Cleveland, OH have a work ethic as celebrated as the stars honored in the Rock Roll Hall of Fame, with a sense of community pride as deep as Lake Erie. But like many communities built on a 20th century manufacturing base, Cleveland is now grappling with its transition to a digital economy. Though the world of digital innovation might be new territory for the city as a whole, Cleveland residents are embracing it with enthusiasm and creativity—and the results in areas such as biomedicine and health IT have been impressive.

Cleveland is located in Cuyahoga County which boasts one of the nation’s best inter-institutional fiber networks–one of the reasons Cleveland was named a US Ignite Smart Gigabit Community. An impressive set of gigabit projects has come out of this network including a joint project with Microsoft for visualizing the human body used at the Case Western Reserve Medical School. The community is now embracing the Internet of Things, and with the support of the Cleveland Foundation has started an impressive IoT Collaborative sparking innovation throughout the region.

While Cleveland’s gigabit applications are certainly on a growth path, the technology gap in core city neighborhoods is growing, too. The city’s most vulnerable residents lack access, and by some measures Cleveland ranks among the least connected cities in the country. While urban schools and neighborhoods are plagued by poverty, digital isolation exacerbates the broader economic issues in more nuanced, but nonetheless damaging, ways.

This is where DigitalC comes in. A civic tech collaboration, DigitalC provides strategies and programs to help communities navigate the pathway to 21st century opportunities for all. As Cleveland’s SGC partner, DigitalC is developing a way to serve the 1/3rd of Cleveland residents who have no access to the Internet.  Architectural planning is underway to utilize existing fiber to 40 buildings across Cuyahoga County to beam small-cell wireless Internet to groups of underserved homes.  DigitalC’s efforts are being devised by Internet architect Rolando Alvarez famous for his Tuinfo inexpensive Internet satellite connectivity for rural areas in Bolivia.

When fully-accessible and optimized gigabit technology becomes available in the northeast Ohio region, the foundation of a gigabit application ecosystem will be here to greet it, thanks to organizations like DigitalC and the people of Cleveland, who never shy away from a challenge.